NEDERLAND — Tree removal along the 1100 block of Atlanta Avenue was completed this week, paving the way for a downtown Nederland redevelopment project.

All were purchased last year, with city council approval, by the Nederland Economic Development Corporation as part of a $400,000 town square project.

The trees were removed from the site this week, preparing for the removal of the structures next week.

Trees were removed this week from the 1100 block of Atlanta Avenue in the Netherlands. (Dominick Hemelt/The News)

After demolition, the Economic Development Corporation will work with a designer and contractor to build new commercial cottages along Atlanta Avenue for resale in the market.

Kay DeCuir said “a few franchises” were already in discussions with the Economic Development Corporation about acquiring the former Irene’s location, which faces Twin City Highway between Boston Avenue and Nederland Avenue.

The EDC executive director said commercial cottages would resemble older homes with large windows and finished inside with bathrooms and kitchenettes.

“We’ll do one at a time,” she said. “Once it’s 70% complete, we’ll put it on the market. Probably these will already be sold out by the time we put them on the market because of the fact that we’ve had people waiting for these things, because they can’t find another place to go.

DeCuir said the Economic Development Corporation would sell the locations to new businesses and not operate as landlord.

“The (EDC) board of directors will place restrictions on what can go in and what can’t go in,” she said. “It still has to follow our revitalization plan and what we are trying to do for the downtown area. All this is not yet determined. We’re just taking baby steps. 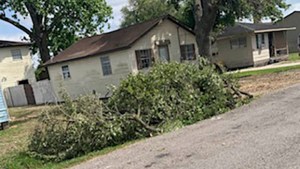 Following the felling of the trees this week, the demolition of the structures is scheduled for next week. (Dominick Hemelt/The News)

Councilwoman Sylvia Root, who is chair of EDC’s board of directors, said the new development would replace the old construction with something better.

“We like to travel, sometimes, and you go to these little little towns and see these neat little shops,” she said. “It’s hard to explain, but it’s nice to know that you now have this in your own hometown. It is progress.

“Big cities have big box stores. Here in our city, moms and pops are our bread and butter. Being able to give them more opportunities to develop is nice to see. People support this idea.

DeCuir said the demolition and construction of new commercial buildings, along with the installation of additional greenery funded by the Port Arthur LNG/Port Arthur News Environmental Champions grant, shows the community that progress is being made.

“They can see good things happening,” she said. “I think a lot of times they think we sit idle, but that’s not the case. It takes years, but you are finally starting to see the pieces fall into place.

“You can explain it over and over again, but until people actually see it with their eyes, it’s not real.”

Trending with the Best at Flo St. Wear, Meet Downtown

Lafayette Police will open a new downtown precinct by May 31