The legacy building – house for MI Table and Apartments – is one of the first buildings in the Great Lakes Bay Area to win a Governor’s Award for Statewide Historic Preservation.

Developer Jenifer Acosta says the designation means a lot not just to her, but to the city.

“The state has a map of all the Governor’s Award recipients in the state, but our area doesn’t have many.” 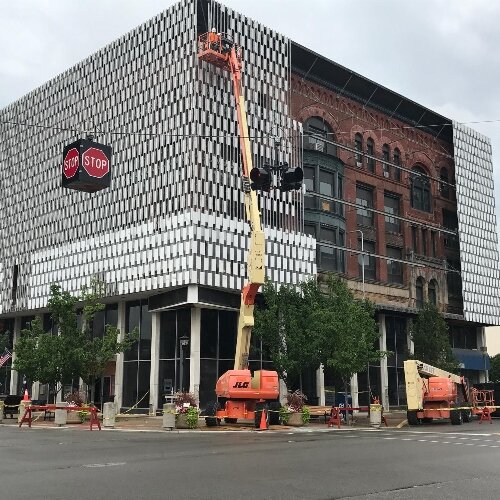 Developer Jenifer Acosta says she keeps one eye on preservation and another on community development when renovating a structure. (Photo courtesy of Acosta Real Estate and Development)Acosta says the historic City Hall building has been named and other buildings have been recognized, but the state Historic Preservation Office naming and honoring the Legacy Building “was phenomenal.”

Around the time the renovation of the old Crapo building began, Acosta and architect Elisabeth Knibbe, formerly of Quinn Evans, planned the price in mind.

“She reminded me that I wanted to make sure we were going to deliver enough excellence to deserve this award,” Acosta said. “It was also a really good way to make sure, as we were building the team, that they understood the level of historic preservation that we were aiming for.”

Along with their goal of excellence, Acosta says she also kept the character of the community in mind. She wanted to retain the unique character and charm of the building, while creating a space that people could and would want to occupy.

“It’s been full since we opened it,” she says.

The building, which was once commercial offices and a bank, now has 26 residential apartments with a restaurant on the lower level. It is located at the intersection of Center and Washington Avenues, which puts it in the heart of downtown.

“We have a lot of people who really like living downtown.”

Acosta teamed up with his father, Rod Hildebrant, on the three-year project which opened in 2019. Prior to the renovation, the Crapo building faced potential demolition. Today it is a vital part of downtown.

Acosta says her idea was to bring people downtown and help create a walkable, livable environment that will slow what she calls “capital flight” and keep downtown viable. .

She doesn’t have any other historic preservations underway yet, but Acosta says she’s still looking for ways to keep Bay City alive and thriving.

“The core of what we do is at the intersection of preservation and community revitalization, and The Legacy is one of the best examples in our development portfolio that connects history with modern adaptive reuse.”

“To be recognized for all of the salvage work that has gone into this project is a huge honor and a testament to the overall value that historic buildings bring to our community. »

In addition to Acosta, Quinn Evans Architects and Spence Brothers Construction were also recognized for their contributions to The Legacy. Acosta says it was a team effort and speaks to the desire of the entire community to preserve the past and bring value to the future.

“New ideas require old buildings,” she says, paraphrasing historical curator Jane Jacobs. “I think the attention to detail and the quality of each project is what we really stand for.”